When my Son was 4 months old, he never, ever wanted to be set down on his own. When I needed to eat or use the restroom, he would get so mad that he was out of my arms and scream the entire time. Carrying around a 15 pound child all day long was not only physically exhausting, but emotionally exhausting as well, as I did not have my own space to take care of my basic needs. In addition to what I was feeling, my Son was not getting what he needed either. Sure he WANTED to be held, but he NEEDED to be able to move on his own and explore his individual place in the world. In her book Dear Parent: Caring for your Infant with Respect, Magda Gerber writes: “Parents who carry their babies most of the time are not giving their infants the opportunity to move according to their readiness. Most animals can show emotion only through touch, but we as humans have an extensive, varied and refined repertoire of ways to demonstrate love.” 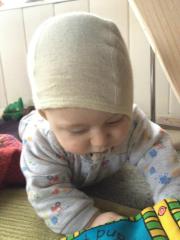 So I was in a position where I was ready for something to change before I had a breakdown. Following Magda Gerbers advice, I would set him down for longer and longer periods of time. At first, he was so mad, he would cry and cry. After a little time, I would pick him up and instead of just mindlessly carrying him around as I had done before, I would really be present with him. I would talk to him about how great he was doing, getting used to being on his own, and how it IS hard to adjust to life here on earth and it’s perfectly alright to cry about it. Eventually, he was on his own longer and in my arms less and we were both finally free to be independent beings, co-existing with respect and love for the other.

Now I have my Son who couldn’t be happier crawling around my whole house while I sit in peace drinking tea and working on my own. He has finally gained the confidence he needed to play on his own. In her post Infant Play-Great Minds at Work, Janet Lansbury writes: “Babies are self-learners and what they truly need is the time, freedom and trust to just “be.” She shares a video of a boy who was left to play on his own for uninterrupted play from infancy:

“The first section is a four and a half month old boy playing outside. We then see the same boy at two years old focusing on a puzzle.  This boy spent his early years in free exploration between naps, feedings and diaper changes.  He was never directed, taught, or otherwise shown ‘how’ he should play. He was only interrupted when absolutely necessary.” I try to remind myself of the last part, and let my Son play uninterrupted. When he needs me, he always lets me know.

One thing I want to be clear of after sharing this story is that this what what my son and I needed. I know of so many mothers who choose to hold and wear their baby for large portions of the day, and I think that is great. It shows me that those mothers are responding to what THEIR children need. If it works for you and your family, then it must be the right fit. If it doesn’t work, which in my case was true, children are adaptable and intelligent beings that will fit into the lifestyle that works for you and your family as a whole.